This disclosure was made by the Commission in a tweet via its official Twitter handle, after taking the delivery of a copy of the Gazetted Company Allied Matters Act (CAMA) 2020 from the National Assembly on Thursday 19th November 2020.

The tweet reads: “The Corporate Affairs Commission has officially taken delivery of a copy of the Gazetted CAMA, 2020 from the Clerk of the National Assembly on Thursday 19th November 2020 and is putting machinery in place to commence full implementation by 1st January,2021.” 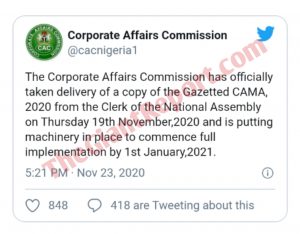 The repeal and re-enactment of the Companies and Allied Matters Act, 1990 as CAMA 2020 is a major game-changer in the corporate regulatory landscape.

The overhaul of the CAMA, which is the foundational legal basis for corporate vehicle regulation, is long overdue as this is its first comprehensive update in 30 years.

However, it is important to note that the Act introduces measures to ensure efficiency in the registration and regulation of corporate vehicles, transparency and stakeholders’ engagement in corporate vehicles.
In like manners, in a bid to promote a more friendly business climate, the Act is expected to reduce the compliance burden of small and medium enterprises (SMEs) in Nigeria.

How to retrieve your National Identification Number – NIMC

Exports Suffer Setback As New CBN Policy Bites Hard       The new policy by the Central Bank of Nigeria (CBN) directing all exporters to present the Nigeria Export Proceed (NXP) number before exporting any good outside the country is currently causing a setback for international trade. Already, the exporters of perishable items groan […]