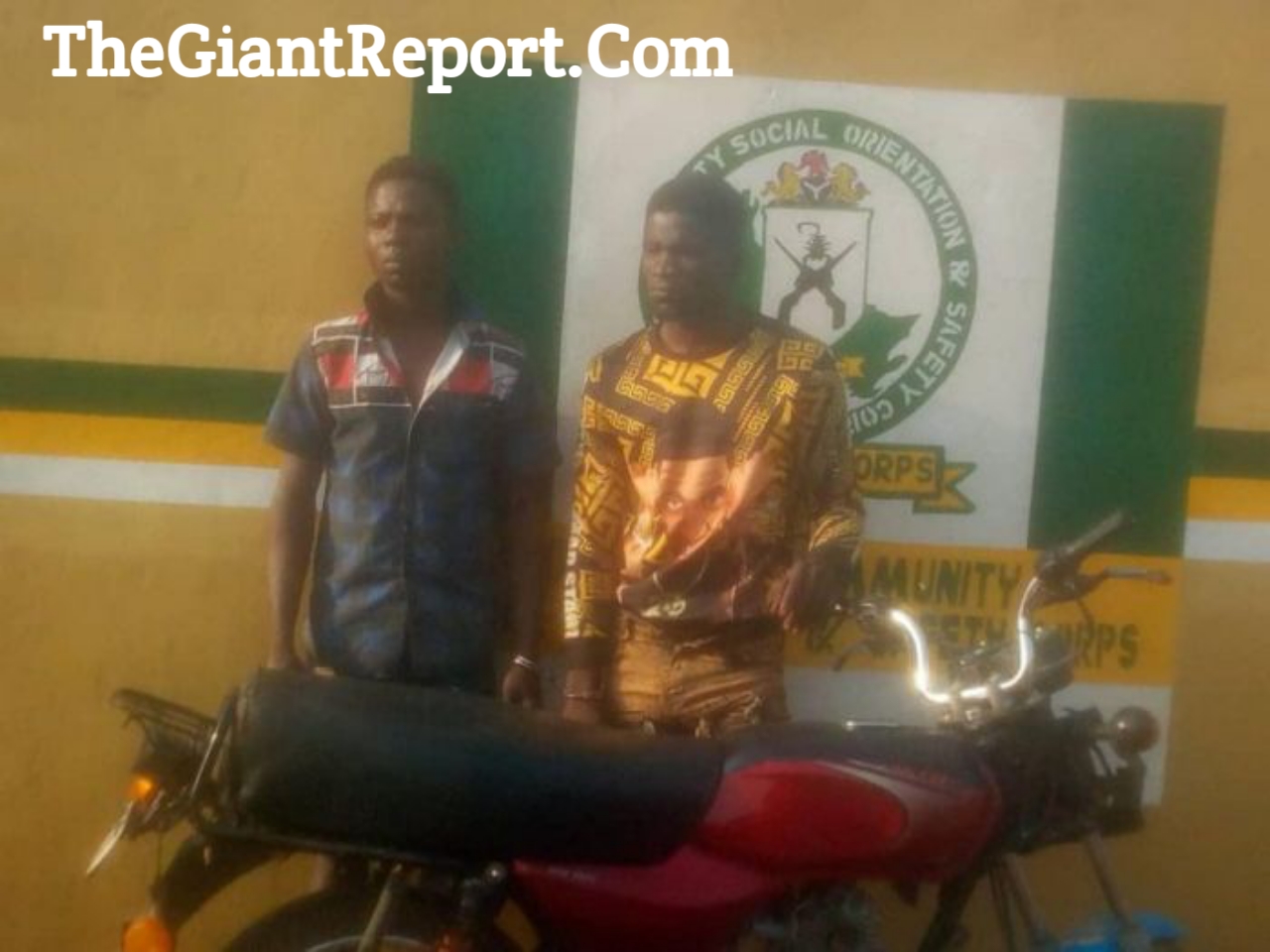 So-Safe Corps, the Ogun State paramilitary security agent, has arrested two suspected robbers who were trying to escape with a motorcycle they stole at Owode Ijako, Ogun State on Thursday.

The suspects, Moses Salam and Damilola Fagbohun, who operated in Ogun State were arrested in Lagos State by the security men.

According to the Unit Commander, So-Safe Corps, Abule Iroko Division, Ogun State, Adenle Ramon, the suspects were arrested at Dalemo Bus stop, Alakuko, Lagos State at 3 am when they were trying to escape with the bike.

He said some of the area boys at the bus stop had accosted the suspects and called the security agents after stopping them.

“We received distress call at about 3 am on Thursday from some of the area boys at Dalemo because we are the closest security outfit to the bus stop that they had stopped two guys driving okada at that period of time.

“We immediately rushed to the scene, arrested the suspects and interrogated them. They confessed that they stole the motorcycle at Owode Ijako and that they were going to Mushin Idioro where they wanted to sell it to one person called Officer.

“We called the number of the Officer but he didn’t pick the calls,” he explained.

On interrogation, one of the suspects, Fagbohun said it was his first time of stealing bike, saying he specialized in stealing phones before.

“The person whose bike we stole is my friend. He is too stinging, he doesn’t give us money and that is why we stole his bike.”

Moses Fagbohun, on his own, said he has been stealing bikes before, adding that it was unfortunate they were caught on Thursday.

“We stole the bike at Owode Ijako in Ogun State and we were on our way to sell the bike at Idioro in Mushin when we were accosted by some boys at Dalemo Alakuko, Lagos around 3:00 in the midnight and handed us over to the vigilante,”

Meanwhile, the So-Safe Corps boss, Ramon said the suspects have been handed over to the police at Alakuko Police Divisional headquarters for further investigation and necessary prosecution.

When contacted, the Lagos State Police Public Relations Officer (PPRO), SP Olumuyiwa Adejobi said he has not been briefed with the case by the DPO of the station.