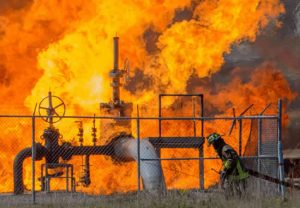 Oil facilities owned by Shell/Agip were attacked on Wednesday by unidentified people in a sign that militant activities may have resumed again in the oil-rich Niger Delta region of Nigeria.

Several explosions were heard in the facilities located at the Ikarama community in Yenagoa Bayelsa forcing Shell to shut down the facility. Nigeria faces a precarious economic crunch that cannot afford to be worsened by militant on oil facilities

What they are saying

According to media reports tracked by Nairametrics, a spokesperson from Shell, Michael Adande, confirmed the explosions admitting that the facility was shut down to minimize the impact.

“We have report of an interference on our pipeline about one kilometer from Ikarama Community in Bayelsa State. We immediately shut-in the line and we have informed the regulatory agencies and stakeholders. A joint investigation team led by government officials will determine the cause of the interference,”

Residents of the Ikarama community where the facility is located complained that they were currently battling with air pollution as a result of the incident. This was disclosed by a youth leader of the community, Ben Warder, in an interview with the News Agency of Nigeria.

He said, “The incident resulted in air pollution from the gas pipeline and crude leak which members of the affected communities are battling to cope with.”

On how the explosion happened on Monday, Warder explained that the residents heard several sounds from the explosions that rocked the oil fields.

He said, “The site is not far from Ikarama, we heard sounds from the blast and it sounded like dynamites and it was not safe to go near. So, when the situation became quiet we had to trace what happened and it turned out that Shell’s gas pipeline and Agip’s crude lines were destroyed.”

He lamented that citizens, for several years, have had to cope with years of oil pipeline vandalism in Nigeria’s Niger Delta and that is one of the major challenges oil companies operating in the region.

The National Bureau of Statistics just confirmed Nigeria fell into a second recession in less than 5 years as the impact of Covid-19 and fall in oil prices took a toll on the economy.

If this bombing continues, then the exchange rate could crash further at the black market and might even force another round of devaluation.

Dangote moves to buy 85 million shares of the company

The Central Bank of Nigeria (CBN) has predicted that the nation’s economy may emerge from recession in the first quarter of 2021. Recall that some days ago, Nigeria entered into recession for the second time since 2016. CBN Governor, Godwin Emefiele, made the prediction on Friday during the 55th annual Bankers Dinner which held in […]

Unity Bank Nigeria Plc has projected a decline in its Profit After Tax (PAT) to N312 million for the first quarter of 2021 (Q1 2021), indicating a decline of 42.6% from the figure recorded in Q3, 2020. This is according to the latest earnings forecast of the firm, sent to the Nigerian Stock Exchange market. Key highlights of […]