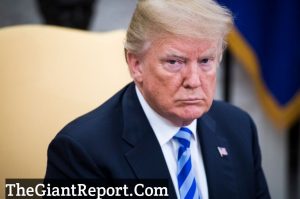 A reporter has been scolded by US President, Donald Trump during an interview.

It happened on November, 26 after the reporter asked him to explain his electoral fraud allegations.

Thursday was the first time Trump has taken questions from reporters since the election.

Since US media outlets projected Biden as the winner earlier this month, Trump has refused to accept the results, instead pushing conspiracies that his second term is being stolen and launching a legal effort to overturn results.

During the tense press exchange, Trump, for the first time stated he will leave the White House if the Electoral College votes for President-elect Joe Biden, but still continued with his voter fraud allegations saying he’s not prepared to concede.

“Certainly I will, and you know that,” Trump said when asked by a reporter about leaving the White House if Biden is declared the winner on December 14.

“It’s going to be a very hard thing to concede because we know there was massive fraud,” Trump said.

“As to whether or not we can get this apparatus moving quickly — because time isn’t on our side, everything else is on our side, facts are on our side, this was a massive fraud.”

The President then added that if Biden is declared the winner, the Electoral College, “made a mistake, cause this election was a fraud.”

Pressed by a reporter on his comments, Trump snapped at the reporter. “You are just a lightweight “Don’t talk to me that way. I’m the President of the United States. Don’t ever talk to the president that way,” he said.

Watch the video below:

Do you know that you can work in Canada without a degree or work experience? Moving to Canada or other developed countries is not easy but we are constantly doing our best to provide the latest information on easy and cheap immigration paths, to those looking to move to a new country. One of the […]

The United Arab Emirates (UAE) has stopped issuing new visas to citizens of 13 mostly Muslim-majority countries, including Iran, Turkey, Syria and Somalia, according to a document issued by a state-owned business park. The document, which was sent to companies operating in the park and was seen by the Reuters news agency, cited an immigration […]