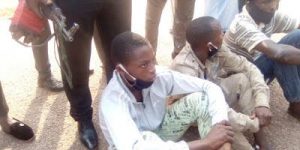 Two of the suspects arrested by the Police in Oyo have narrated how they sold the heads of 2 slain policemen to a herbalist for N1000.

The state Commissioner of Police, Mr Nwachukwu Enwonwu, said the latest arrests were made by personnel of the Quick Intervention Unit of the command, who used the viral videos on the social media in which the policemen were burnt to trace the suspects, Tribune reports.

The main suspects, Abiodun (17) and Mubarak (24), confessed that on October 22, after two policemen had been burnt at Iwo Road, they found their severed heads by the roadside and took them to a herbalist, Ifakorede (44), who gave them N1,000 for them.

Abiodun, a secondary school leaver, said Mubarak, a motor boy, had called him in the evening of October 22 to follow him to his girlfriend’s house at the Alabata area.

He said as they were going, they got to the scene where the two policemen had been burnt and saw people severing their body parts.

“At the area, we found two already burnt heads that had been severed and Aliu said we could sell them to a herbalist. I initially resisted but he said there would be no problem, and that was how we took the heads in a polythene bag to the herbalist.”

While also confessing, Mubarak said after taking the heads, they took them to a herbalist residing in his area and he explained to him that they were the heads of policemen burnt at the Iwo Road area earlier in the day.

Mubarak said he knew Ifakorede as a herbalist and that he was always buying strange items.

He said he had sold local eggs to him in the past and that he felt he would also be interested in the heads.

Ifakorede, on his part, confessed to have collected the heads from the boys, adding that he wanted to use them for ritual purposes.

Nigeria – Taraba State government is to spend over 139 Billion Naira for both its recurrent and capital expenditure in the 2021 fiscal session. A breakdown of the budget indicated that the government will spend a total of Eighty-two Billion, Nine Hundred and Ten Million, Forty-Eight Thousand, Six Hundred and Fifty Naira, Ninety Kobo (N82,910,048,650.90), […]