The Kaduna state government has started screening youths in its preparation to commence community policing to tackle the general insecurity in the state. 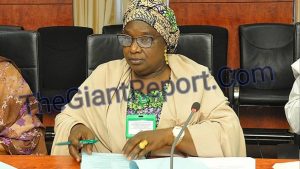 The Acting Governor, Dr. Hadiza Balarabe, chaired a meeting which is part of the consultations in the three senatorial districts on how to address insecurity on Monday.

The meeting had senators, members of the House of Representatives, state House of Assembly members and chairmen from the 15 local government areas in Kaduna North and Kaduna Central senatorial zones as well as District Heads in attendance.

Speaking with journalists after the meeting, the senator representing Kaduna Central zone, Malam Uba Sani, said they came together to look into the security problem facing Kaduna, stressing that insecurity needs to be tackled collectively.

Uba Sani, noted he was working on a bill to restructure police architecture, to meet contemporary challenges, adding that if it scales through, the bill will create state police.”

I am working on a bill to restructure the police architecture, that will pave way for federal and state police. We want to solve insecurity in the state and Nigeria as a whole,’’ he said.

“The Commissioners of Local Government and Internal Security have briefed us during the meeting.

You know State governors have no control over security. We are working on restructuring the police architecture to enhance our ability to solve insecurity,’’ he added.

On his part, the Commissioner of Local Government, Alhaji Ja’afaru Sani, said the state will commence thorough screening of selected youths by their district heads for community policing to fight insecurity. ”

We are confident that community policing will solve the insecurity issue,’’ he said.

Commissioner of Internal Security and Home Affairs, Samuel Aruwan, who made a presentation on government efforts and steps in tackling insecurity, said the government will continue to engage traditional, community, political leaders among others to end it.

His Excellency, the Executive Governor of Bauchi State, Senator Bala Abdulkadir Mohammed Kauran Bauchi today commissioned the distribution of COVID-19 palliative materials to Bauchi Local Government Area of the state. During the ceremony held at Multipurpose Indoor Sports Hall Bauchi, Governor Bala said the final distribution to beneficiaries in Bauchi Local is to curb the […]

Bokoharam terrorist this evening kinnaped large numbers of passengers along the Damaturu – Maiduguri. Watch the video as some passer by video the scene aftermath. Updated On Maiduguri – Damaturu. “1 Killed, 4 Injured, Dozens Of Travellers Kidnapped On Highway 19, 2020”