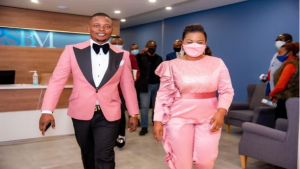 Malawi’s minister of Information announces that there has been prepared for the arrest of Prophet Bushiri and his wife Mrs. Mary.

The Malawian government affirmed on Tuesday that the method to have self-proclaimed prophet Shepherd Bushiri and his spouse Mary captured has begun.

In an interview with Malawi’s minister for Information he said and as caption,

“The attorney-general is preparing to proceed for the signature of the minister of homeland security in Malawi. Once it is signed, it will be submitted to court for issuance of warrants of arrest by the court. When that is done, prophet Bushiri and his wife will be arrested.”

Establishment of Institute of Trypanosomiasis Research in Gombe

Anthony Joshua has warned Tyson Fury of his bad intentions when they eventually meet in the ring next year. “I want to take his head off his shoulders when that fight happens,” Joshua said on Tuesday as he also spoke of his more noble commitment to offer “substantial financial backing” to the amateur national boxing […]