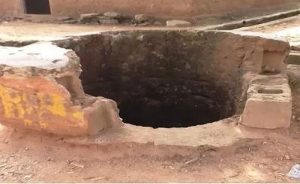 Binta Shehu, a 10-year old girl, has died in a really tragic manner.

The little girl died after falling into an open well in Yanka Tsari village of Dawakin Kudu Local Government Area of Kano.

The girl was said to have gone to the well to fetch water where she eventually fell and was later rescued unconsciously.

Confirming the incidence, the spokesman of the state fire service, Saidu Ibrahim, said at about 2.20pm on Wednesday, a distress called was received through one Musa Ibrahim informing the service of the incidence.

“A rescue team was dispatched to the scene and discovered that the victim had fallen into the well and was removed unconsciously but later confirmed dead,” he said

“The corpse has since been handed over to the ward head of the village, Junaidu Alasan, on behalf of the family,” he added.

He advised households to wall up their wells to prevent children from such occurrence.

PTF Chairman, Mr Boss Mustapha, announces new COVID-19 measures at a briefing in Abuja on December 21, 2020. The Federal Government has imposed new restrictions amid the rising cases of coronavirus (COVID-19) in various parts of the country.   Mr Boss Mustapha, who is the Chairman of the Presidential Task Force (PTF) on COVID-19, announced […]

A 37-year-old headmistress, Christiana Ayeni, has landed in trouble while enforcing discipline by reportedly checking the private parts of four female students inside the school over virginity. P.M.EXPRESS reports that the headmistress was arrested, arraigned in Court and was remanded in Ilesa Correctional Centre for unlawfully and indecently assaulting the students. The incident happened at […]

All salary people must read this

All salary people must read this:—– After 4 years of selfless service, I realized that I had not been prmoted, no salary increment, no commendation. So I decided to walk up to my HR Manager. The manager looked at me, smiled and asked me to sit down saying: “My friend you have not worked here […]