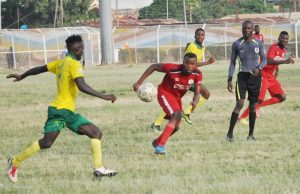 According to a statement signed by the Public Relations Officer of the community, Okpani Jacob Onjewu Dickson, this was made known at a press briefing held yesterday in Kaduna.

Reading the text of the statement, President General of the Tsaunin Kura GRA Residents Association, Dr. Silas Adamu said that the decision was based on concerns raised by Governor Nasir el-Rufai.

“We are concerned by the surge of Covid-19 cases as expressed by our Governor, Nasir el-Rufai, who is genuinely concerned about the well being of all citizens in the state,” he said.
He explained that already, the decision to postpone the final has been conveyed to the Speaker, who has also commended the community for the decision, which he described as noble.

Dr. Adamu, therefore, expressed regrets for inconveniences caused by all teams and several dignitaries who had put in much preparation into gracing the final matches.

Though he didn’t disclose when the new date of the anticipated final would be, he hinted that the date will be announced once the second wave of Covid-19 clears in consultation with the Speaker and other key stakeholders in ensuring the safety of guests, community members, and players is guaranteed.

He, therefore, charged residents of the community to ensure they strictly adhere to Covid-19 protocols as advised by the NCDC.

BAUCHI: GOVERNOR BALA DISTRIBUTES KEKE NAPEP AND COMMERCIAL MOTOR VEHICLES His Excellency, the Executive Governor of Bauchi State Senator Bala Abdulkadir Mohammed today performed the official commissioning ceremony of the distribution of 655 units of Keke Napep and 154 units of commercial motor vehicles. Speaking at the occasion, Governor Bala said the development is to […]

A South-South group, the Niger Delta Advancement League, NDAL, has vowed to throw their weight behind the South West in the 2023 presidential race. The group made its position known in a statement signed by its National Coordinator, Sunday Boniface and made available to thegiantreport on Wednesday. NDAL said it has carefully and critically studied […]