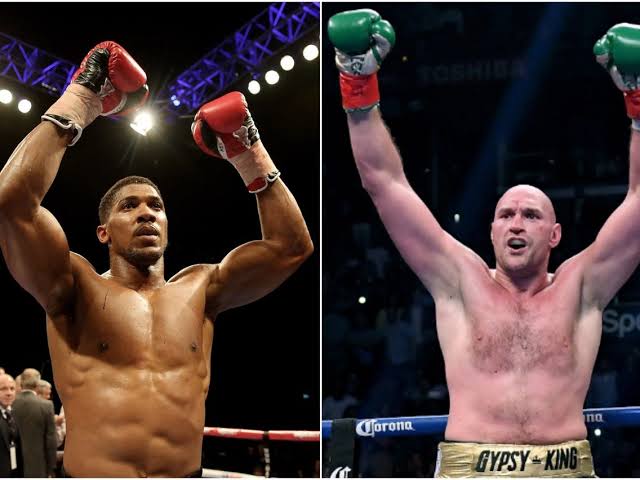 A long awaited clash between the two top heavyweights in boxing is finally coming together.

For the past two years, top British heavyweights Anthony Joshua and Tyson Fury have been sparring with each other everywhere but in the ring. Between Joshua’s ability to fill a stadium against anyone with a pulse and Fury signed to a promotional deal with ESPN, it looked like there was a good chance this would be just another big bout boxing simply couldn’t put together.

But now the word is Joshua vs. Fury has been verbally agreed to and will go down in the summer of 2021.

“Eddie Hearn says Tyson Fury-Anthony Joshua is verbally agreed to and contracts are being drafted for the heavyweight championship fight in May/June,” Coppinger wrote. “Hearn says only ‘minor issues to resolve’ such as who walks last, the site, etc. This fight is going to happen next.”

Tyson Fury hasn’t fought since an impressive 7th round TKO win over Deontay Wilder where he took the fight to the feared slugger and forced “The Bronze Bomber’s” corner to throw in the towel. Anthony Joshua returned to the ring last week, KOing outmatched mandatory challenger Kubrat Pulev in the 9th round.

With both Fury and Wilder’s management ready to pull the trigger on this superfight, there aren’t many obstacles left that can’t be overcome. But one that will have to be dealt with is the mandatory challenger for Joshua’s WBO title, Oleksander Usyk. Fortunately, it sounds like money can clear that hurdle.

All four belts might end up in the same hands of one person,” Usyk said recently. “It might be a once in a lifetime opportunity. We should all talk and communicate for that to happen because it is a really big event.”

Really big is almost an understatement. The two biggest stars in heavyweight boxing, both touting exciting styles, both throwing some pretty serious trash talk? With all the major heavyweight titles on the line to determine a unified heavyweight champion? Damn, son. Sign us up.