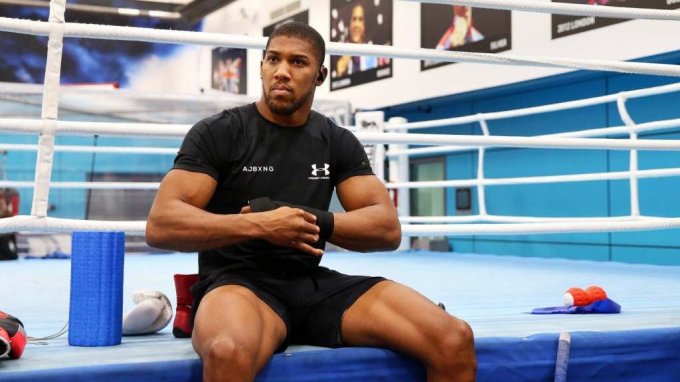 Anthony Joshua has warned Tyson Fury of his bad intentions when they eventually meet in the ring next year. “I want to take his head off his shoulders when that fight happens,” Joshua said on Tuesday as he also spoke of his more noble commitment to offer “substantial financial backing” to the amateur national boxing federations of England, Wales and Scotland so that he can help clubs in need of support during the pandemic.

Joshua, who defended his IBF, WBA and WBO world heavyweight titles when knocking out kubrat pulev this month, stressed how his local boxing gym in Finchley had saved him from a troubled path which could have seen him end up in jail. But in the midst of calling on the government to help support grassroots boxing, Joshua could not resist remembering a 2010 sparring session between him and Fury at Finchley Amateur Boxing Club.

As he sat in the same gym Joshua suggested that Fury, the WBC heavyweight champion, “knows about my uppercut. He knew about it from when I was [20]. Trust me, he knows what’s coming. All I wanted was his Rolex watch [because] he said before that spar: ‘If you can beat me up or knock me out, you can have my Rolex.’ It was a good spar and I didn’t really know too much. It was just passion. Now I have some boxing IQ to go with my passion, it will be a great fight.”

Last week the BBC unearthed an interview the 22-year-old Fury did after that sparring session. Fury, who had made his pro debut in December 2008, said: “Anthony Joshua’s red hot. He gave me a big uppercut [and] if I had a bit of a weak chin I’d have been knocked out for a month. I rate myself as one of the top heavyweights in the world but for three rounds he gave me a beating. I thought: ‘Oh my God, an amateur’s killing me!’”

ALSO READ :  [100% OFF] Complete Course on Blockchain and Crypto Currency

Joshua insisted that: “I was hungry then and I’m even hungrier now. There was a Rolex [on offer then] but now there is an even bigger pot of gold at the end of this rainbow and I want to take his head off his shoulders when that fight happens. I’m sure that I’ll win.”

But he downplayed his promoter Eddie Hearn’s claim straight after the Pulev fight that a £200m Fury-Joshua unification contest would be announced within a few days. “How close are we? I promise you conversations are happening,” said Joshua. “But until you hear it from me, don’t buy into anything. I’m serious about the fight so when I announce it you’ll know it’s real.”

Joshua made some salient points about the crisis facing grassroots boxing and his sizeable donation comes at a crucial point for the amateur sport. “I definitely think boxing gyms will go under,” Joshua said. “That’s why it’s important to keep talking about it. Professional boxing has found a way to survive but without the amateur system, the grassroots clubs, there are no Olympians and without them there are no world champions in the country.

“If me and Tyson fury fight, which I’m sure is going to happen, it’s going to be one of the biggest sporting events in this country since the [1966] World Cup. I’m in the grassroots gym which made me and it’s struggling. Hopefully this will raise the eyebrows of people in power and they will put some money towards boxing.”

Joshua was asked what might have happened to him if he had not boxed as an amateur at Finchley. “Sean Murphy [his former amateur trainer] is in the background and he says I would probably have been doing time. I wasn’t a bad kid but Sean says I had some bad people around me. Honestly if the gym had closed … I remember I got kicked off the Olympic squad in 2011 and I gave up on boxing. I started going back to my local area. I started smoking again. Sean rang my mum and said: ‘Where’s your son? He’s messing around. Get him back here to the gym.’ That shows how important it is not just to have the gyms open, but access to people from an older generation who can give a sense of wisdom, belonging and guidance.”

Asked if the government should step in to save grassroots boxing, Joshua said: “They’ve done great things with the package for people who are working, with furlough, and even putting money into sport. But there are other sports that need it. I know the importance of boxing in the community, for the nation and for the economy. We’re trying to bring awareness and say: ‘Guys, you’re doing a great job but just consider boxing next time. I’m sure there will be some private investors, people like myself, who are going to make a difference.

“Grassroots sports changes the lives of many people. So let’s also keep boxing in mind for the future – because me and Tyson Fury in 2021 is massive. We’ve done this from the grassroots, from next to nothing. So with a little help who knows how far we can go as a boxing industry?”