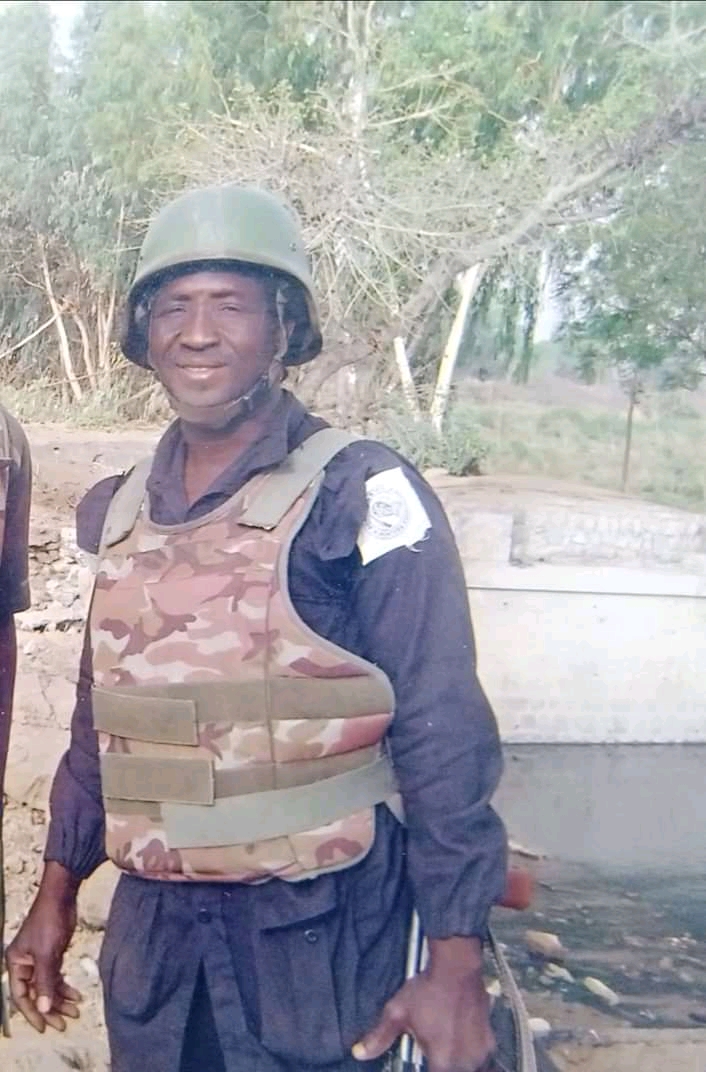 Morris Enoch (13th Sept., 1955 -29th Dec., 2020) Young Morris as he is popularly called, is a mixture of mystery and ordinariness. A photographer turned marksman. His life and times was devoted to peace and security, most of which was on voluntary basis. He joined the Nigerian Army in 1980 and after three years he voluntarily resigned. He returned to Numan and established a photography business, that gave him the name Young Morris.

Possibly buoyed by his experience in the Nigerian Army Peace Keeping Mission, Young Morris began to engage himself in vigilante activities around Numan area. Multi-talented Morris is a professional photographer, professional mechanic and a marksman of no mean repute.

Young Morris had on several occasions led men into operations to dislodge or neutralise bandits, terrorists or kidnappers. He had many a times cracked notorious criminal gangs.
Because of his selfless contributions in fighting crime and criminality, Young Morris who hails from Guyuk Local Government, Adamawa State was elected as a councillor to represent Nasarawo/Demsa Ward in Demsa Local Government, Adamawa State, under the auspices of the People’s Democratic Party, in 1999. Young Morris later became the majority leader of that legislative council.
Young Morris came to prominence in 2014, when Adamawa State Government invited him to lead team of hunters and vigilantes to liberate areas taken over by Boko Haram insurgents.
With his men, he was able to successfully dislodge the insurgents from Gombi, Garkida, Hong, Maiha, Mubi, Bazza, Michika and Madagali towns in Adamawa State and Liman Kara in Borno State.
On 5th March, 2016 Lunguda Traditional Council conferred on Young Morris the title of Sarkin Bindiga Lunguda. No sooner was Morris turbaned that trouble started. He was framed for gun running, a charge that landed him behind bars. It took the intervention of lawyers, one of which was a senior advocate, to get Morris cleared of the charges. His rifle and his Toyota Hilux van which were ceased was not returned to him, to this day.
Undeterred, the civilian general and father of 17, continued with the good work in Madagali Local Government in Adamawa State, between June 2017 to October, 2018.
Gugu village, in Guyuk Local Government Adamawa State, where Young Morris came from, he is seen like any other fellow there. Yes, Young Morris has one outstanding character, he is humble to a fault. He greets even young people with a bow. He relates with all classes of people with much ease. Sparking a conversation with Young Morris is not difficult. He is always willing to share his concerns on security matters. But the mystery about the man is, when he begins to share his experience with Boko Haram insurgents in Sambisa Forest or gory battle experience in Bazza or his combat expedition with kidnappers and cattle rustlers, then it makes one to take a second look again at him again.

Many people have heard of Young Morris and are eager to see him, some will never do, even those who met him are perplexed at the ordinariness of the man, juxtaposed with his wonderful combat stories they have heard about him.
On Tuesday 29th December, 2020, when the news of his demise broke, that he was killed by bandits along Abuja-Kaduna express way, everyone hoped and waited for a refutal, but it never came. Indeed he was gone like any other mortal.

Personally I feel pained that Young Morris might have been killed by “enemy within” or should I call it friendly fire? For those of us who knew him, he has one major weakness: trusting people easily and forgiving them simply. If not for the results of his exploits that are usually independently verified, one would have wondered if Young Morris has what it takes to understand combat. I say so because, he is so unassuming that, you may tend to doubt his ability.

Perhaps, the mixture of mystery and ordinariness, has helped Young Morris to contribute his quota to humanity in his own special way. He has chosen the difficult task of building the society by fighting crime. His death is a blow to his family, Lunguda by people, Numan Federation, Adamawa State, Northeast, and of course the Federal Republic of Nigeria. Young Morris, rest from the flying bullets, the battlefield will never be quiet, and your stead will never be empty. Good night, the Civilan General.