The management of Bet9ja has revealed that its website has been hacked by the Russian Blackcat group.

If you’ve been trying to access the bet9ja site you’ll notice that the site is not going through. That’s because the site has been hacked by russian blackcat group.

This was disclosed by Bet9ja in a statement in which it identified the perpetrators as the Russian Blackcat group, who are famous for several attacks on huge companies around the world.

The gaming site said that the group has already demanded ransom but it insists it will not accept the conditions of the hacker group.

What bet9ja says so far

Part of the statement reads, “The entire Bet9ja system has been under attack by the Russian Blackcat group who are famous for several attacks on huge companies in the world. It is a huge hacker attack by this Russian group but our people have been working since yesterday without stopping for a minute to restore all the services but it is not easy. 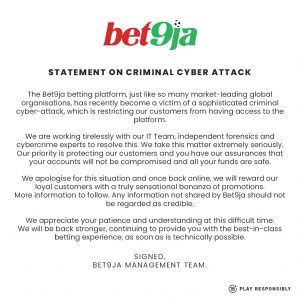 “They are asking for ransom already but we will never accept their conditions. It is important to let you know this so that we are all on the same page. They have hit us hard but of course they cannot kill us. We will stand our ground and come back even stronger.

“Please do not be discouraged, we will surely restore things as soon as possible and provide an update on the progress.”

Bet9ja acknowledged in an earlier social media post that user funds and winnings are safe as it is working to resolve the issue.

According to reports, the Russia-linked cybercrime gang, BlackCat, was behind the ransomware attacks that took down a swath of and hindered payments at some German filling stations in January

It was reported that hackers using a strain of ransomware known as “Black Cat” infected computers at Mabanaft GmbH and Oiltanking GmbH Group.

BlackCat (also known as ALPHV) is a relatively new ransomware-as-a-service (RaaS) operation, which has been aggressively recruiting affiliates from other ransomware groups and targeting organisations worldwide.

In This post we will guide you on how to create or Open a US bank account in Nigeria without much Hassel, all you have to do is to read this article to the End. Some People think Is impossible To open A Bank Account In USA from Nigeria, Well it’s true to some extent, […]

In this article we will review the cdcare platform that enables you to buy stuff, like gadgets, electronics, Smart phones online and pay later on installment. This is a comprehensive review on the CDcare App, cdcare-ng.com. Cdcare offers no-interest instalments for gadgets and appliances.CDcare combines flexible instalment payments & schemes that help you to pay […]