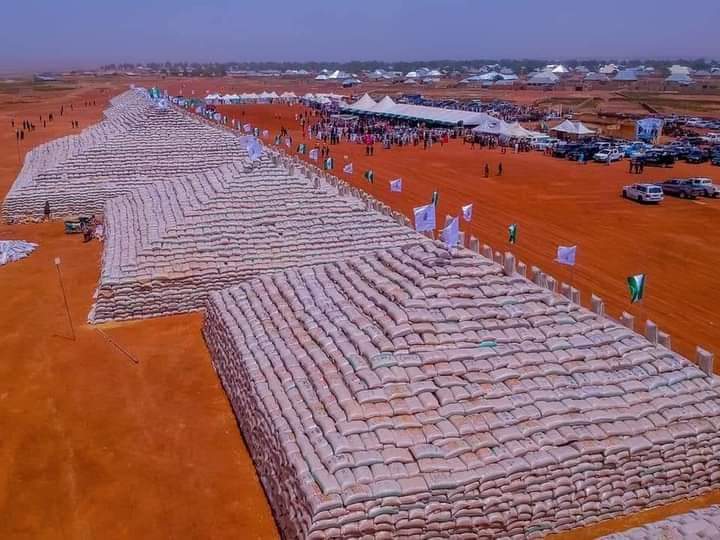 Last Updated on June 17, 2022 by thegiantreport

The current agricultural policy in the country has yielded little or no positive impact on the life of the common man an indeed the average farmer in Nigeria. The situation can only be described as a downward roll from “bad to worse” with an accompanying stagnated growth in the sector that has left us as laughing stocks in the comity of nations more especially as agricultural revolution has attained an increasing boost globally both technologically, subsistence or otherwise.

China and United States are top producers of rice but are also importers of rice.

The answer depends on the quality of thinking of the leaders of the two countries, dictated by circumstances at different times. When there is supply deficit, they import to feed their people. When there is surplus they stockpile and export to earn forex. When there is equilibrium they neither export nor import but motivate farmers with subsidy and other incentives to keep production going.

There could never be enough rice in the world. It is world’s staple food on demand at all times. It is also world’s most important staple after wheat.

But Nigeria has a per capital rice consumption of 32kg with annual demand of 6.7 million tones. Yet it produces 5 million tones and refused to import to bridge the 1.7m deficit. No wonder there is high price of rice caused by shortages which created food insecurity in the country. Despite all efforts,the government has fallen short of meeting local demand and with that has no surplus to export and earn foreign exchange.

Our poor investment in agricultural capital infrastructure is a big cause of our poor performance in rice production. Government spends on fertilizer that is mostly imported wasting forex and at same time says it is saving money by banning import of rice. The biggest drain on Nigeria’s foreign reserve is petrol importation not rice. Meanwhile Nigeria is among the biggest producers of oil in the world.

The government has also not given sufficient funds to rice farmers. Where the loans are available,they are hijacked by government officials,party sharks “Abuja farmers”family and friends, political associates, and all who fall within the circle of those fortunate to be bestowed with favouritism.

There is also general insecurity created by bandits,Boko Haram and kidnappers that has prevented people from going to farms. For a stretch of five years farmers in most states in the North could not farm their lands properly

ALSO READ :  You Will Be Shocked To Find Out You Do Not Know 99% Of These

So next time you hear of food insecurity,this is the root causes of the problem”

Only recently the APC led Government celebrated an over estimated gargantuan rhetoric where rice pyramids was showcased with the assurance that the skyrocketing price of to the staple food will drastically drop and that its availability will be in surplus. It is more than a year since this choreographed circus show was exhibited with intent to hoodwink the gullible. What impact has it made?
Has the price of rice dropped?
Is rice surplus enough for consumption in the country?

All those who hyped the CBN project have gone into hiding while the poor farmer and his family still wallow in abject poverty, frustrations and a general sense of despondency, all thanks to bad policy in governance fuelled by praise singers and unscrupulous elements who are hell bent on fleecing our reserves. Treasury looters on the prowl having a field day while the common man languishes.

Let truth be told. The current agricultural policy has failed the farmer and indeed the nation. It has no impact on our GDP and relatively no impact on the standard of living of the masses. Meanwhile billions have been frittered away under the guise of the anchor borrowers scheme and other related programmes. Yet it has come to naught!

It is a pity that we will only learn the hard way in this country!!!